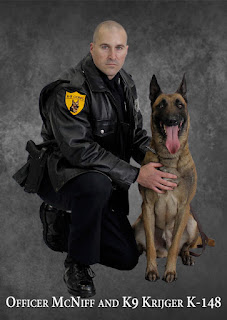 The American Kennel Club announces the launch of its newest award, the “AKC Paw of Courage,” in an effort to show appreciation for the many sacrifices that working dogs make while serving and protecting our country. This award specifically recognizes the extraordinary sacrifices of dogs who have been severely injured or killed in the line of duty.

The first recipients are:

--K9 Officer Ogar: of Smith County Constable’s Office – Precinct 5, Texas: K9 Ogar, a one-year-old Belgian Malinois of Smith County Constable’s Office in Texas, was shot and killed while attempting an apprehension this past January. K9 Ogar and his handler, Deputy Constable Kevin Petty, were conducting a routine traffic stop when a vehicle fled, leading to a pursuit. The vehicle was wrecked and the subject evaded on foot into a wooded area, and K9 Ogar was deployed. During this confrontation, K9 Ogar was shot and killed. Deputy Constable Petty says, “Ogar sacrificed his life to save mine.” He says that Ogar was always right by his side and looked at him with true love and devotion.

--K9 Officer Betcha: of Rutland County Sheriff’s Office, Vt.: K9 Betcha was a two-year-old Australian Cattle Dog who served as a narcotics/tracking K9 at the Rutland County Sheriff’s Office in Vermont. He was with the Sheriff’s Office for about a year when he was struck and killed by a vehicle while in the line of duty. “He was my fourth K9 partner but my first dog that I can say was my therapy,” says his handler, Deputy Sheriff Edward Hunter of Betcha. Deputy Sheriff Hunter has been in police work for 35 years and says that K9 Betcha truly helped him cope with his past and present in the job.

--K9 Officer Krijger: of Norfolk Police Department, Va.: K9 Kirjger, a four-year-old Belgian Malinois of the Norfolk Police Department in Virginia was shot and killed following a violent barricade situation this past January. Police were responding to a domestic violence call when the man barricaded himself inside his home with his wife as a hostage. After several hours, the man exited the home opening fire on the officers, fatally wounding Krijger.
Posted by raymondaedel@gmail.com at 8:00 AM