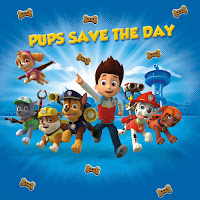 “PAW Patrol Live! Race to the Rescue” will stop at New York City’s Theater at Madison Square Garden from Thu., March 23, 2017 through Sun., March 26 as a part of its premiere tour.

The music-filled adventure features more than a dozen characters from the hit animated preschool series “PAW Patrol” live on stage.

The show combines classic theatrical scenery along with a high-tech video wall to visually transport families to popular locations from the TV series, like Adventure Bay, The Lookout, Seal Island, Farmer Yumi’s Farm and Jake’s Mountain.

“PAW Patrol Live! Race to the Rescue” will be at the Theater at Madison Square Garden on the following dates and times:

Tickets are available in person at MSG, Radio City Music Hall and the Beacon Theatre Box Offices beginning Sat., May 21, 2016.
Posted by raymondaedel@gmail.com at 8:00 AM