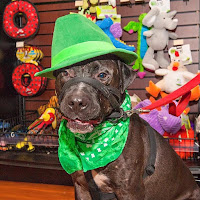 A year ago, Jude was a victim. But, then something happened. A kind hand reached out to him, and though he had been betrayed by the humans he loved, he looked up, wagged his tail and licked this hand. Jude’s hope wasn’t lost, and neither was “A Pathway to Hope” rescue.

In the days, weeks and months that followed, Jude faced so many battles, both in physically coming back from death multiple times and with the stereotype of a big black pit bull who survived dog fighting to find a place to belong. Jude was failed by humans.

Email ThisBlogThis!Share to TwitterShare to FacebookShare to Pinterest
Labels: A Pathway to Hope