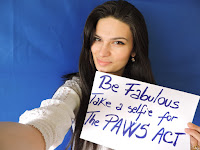 Adriana Meucci and Jules Lavallee have now forged ahead to educate people about The Pets and Women Safety bill and are getting celebrities involved in their “Selfies for PAWS” campaign.

The Pets and Women Safety Act, a bill to protect the innocent victims of domestic violence, dating violence, sexual assault and other traumatic emotional and psychological violence acts was introduced in June 2015 has not been approved by the congress.

Meucci is a freelance writer. She has written on a number of welfare topics and issues regarding women, higher education and animals. She wants to raise awareness about this act. It is encouraged by the PAWS act which is also a bill proposing funds to helps agencies fighting for e rights, shelter and safety of women and pets who flee spousal violence. Meucci along with the Boston-based entrepreneur, philanthropist and animal lover named Jules Lavallee are very willing to provide safe haven for women and the pets fleeing domestic abuse.

On a blogging website Meucci stated, “Over 40 percent of women remain in dangerous and abusive partnerships because they do not want to leave their beloved pets behind when deciding to flee. ” she understands the pain and grief of such abuses and thus has been static on her words before the congress to pass the bill. She further said, “Such acts of violence puts women and children in horrendous predicaments” which can be a serious threat to the peace and people’s right to live.

Meucci and Lavallee want to spread awareness through all possible means and support the fact that women are brutalized and abusers use pets to torture and dominate women and this unfortunately leads to maimed pets and can even kill them. In order to resolve the issue and make it a law, both are working for the cause. And for this reason, they have encouraged celebrities to get Selfies for PAWS campaign and post their snapshots with Pass the PAWS Act message.

To sign a petition or for more information, go to www.change.org/p/pass-the-paws-act.
Posted by raymondaedel@gmail.com at 8:00 AM