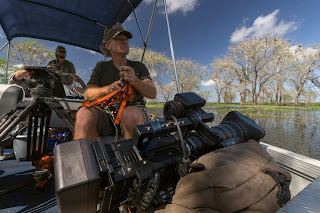 Poole will share images and stories of Mozambique’s Gorongosa Park’s majestic animals, and the conservation efforts underway to ensure their future.

During Mozambique’s 15-year civil war, nearly 97 percent of all the elephants in Gorongosa National Park were killed for their ivory tusks, which soldiers sold to purchase weapons.

Thousands of other animals, including majestic zebras and lions, were also slaughtered for money and food. Today teams of scientists and conservationists are working to restore the park to re-wild this once-legendary park.

In this Nat Geo Live talk, Bob Poole will discuss the conservation efforts, and share secrets of filming lions, crocs, elephants and spectacular scenery, which can be accomplished by learning to read the landscape and find prime locations for filming the park’s spectacular wildlife.

Tickets, from $35 to $70, are available at www.nyuskirball.org/natgeolive.

The NYU Skirball Center is located at 566 LaGuardia Place, Manhattan.
Posted by raymondaedel@gmail.com at 8:00 AM