Skechers donates $3 million to save dogs’ and cats’ lives 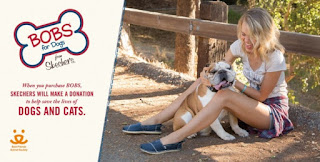 BOBS from Skechers, a division of footwear company, Skechers USA, Inc., has announced a multi-year partnership with Best Friends Animal Society, a national animal welfare organization dedicated to ending the killing of dogs and cats in America’s shelters.

To support the non-profit, BOBS from Skechers has committed $3 million to further Best Friends Animal Society’s lifesaving initiatives
.
For every purchase of BOBS, Skechers will make a donation to support Best Friends’ programs that reduce the number of companion animals entering shelters and increase the number who get placed into loving homes.

As part of the partnership, BOBS from Skechers will serve as the presenting sponsor for the animal welfare organization’s major national events including Strut Your Mutt and Super Adoptions, and participate in additional year round initiatives. The partnership will also include a limited edition BOBS footwear collection that will launch in spring 2016.

To learn more about the partnerships go to www.BOBSfromSkechers.com.
Posted by raymondaedel@gmail.com at 8:00 AM