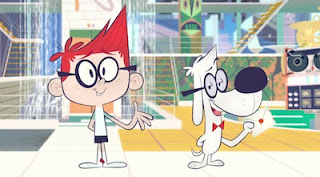 Tune into ”Jeopardy!” 7 tonight (Thu, Oct. 8) on WABC-TV/Channel 7, when Mr. Peabody, the world’s smartest dog, will be the first canine in history to host a full category on “Jeopardy!”.

Mr. Peabody is a worldly dog and his WABAC time machine has given him the opportunity to meet many historical figures, so he is sure to have some tough clues for his category titled “Mr. Peabody & Sherman."

No coincidence, but “The Mr. Peabody & Sherman Show” will premiere on Fri., Oct. 9, exclusively on Netflix.

Set in their swanky penthouse apartment atop beautiful Templeton Tower, Mr. Peabody and Sherman will take late night television to a hilarious new level in the first animated talk show for kids. Complete with a “live” studio audience and special guests.
Posted by raymondaedel@gmail.com at 2:18 PM