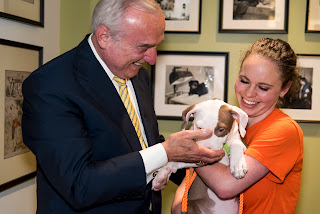 The American Society for the Prevention of Cruelty to Animals and the New York City Police Foundation have announced a collaboration through the foundation’s Crime Stoppers program that will, for the first time ever, allow the public to easily and anonymously provide information about animal cruelty crimes in the five boroughs. Crime Stoppers offers rewards of up to $2,500 for tips leading to an arrest and indictment, and starting now that will include animal cruelty cases in New York City.

This collaboration is an extension of the official partnership between the NYPD and the ASPCA that was launched in Jan. 2014. In it, the NYPD takes the lead role in responding to all animal cruelty complaints in the five boroughs and the ASPCA provides direct care support for the victims as well as police training and forensic analysis. A year and a half since its city-wide launch, the NYPD-ASPCA partnership continues to produce record-breaking numbers of both animal cruelty arrests and rescued animals across NYC. In the first six months of 2015, there has been a 28 percent increase in arrests and 115 percent increase in animals treated over the same time period in 2014.

“Crime Stoppers is an effective crime fighting tool, providing a way for the public to work with the NYPD to keep their neighborhoods safe,” said New York City Police Commissioner William J. Bratton (pictured, left). “Violence has no place in our city, whether it’s committed against a person or an animal. If you have information about any crime, we encourage you to call Crime Stoppers to help us in our fight against animal cruelty.”

“By working with Crime Stoppers we are giving New Yorkers the means and motivation to stop dangerous criminals and giving animal victims a better chance to survive and recover,” said Matthew Bershadker, President and CEO of the ASPCA.

If you have information about a crime, tips can be submitted by calling the Crime Stoppers hotline at 1-800-577-TIPS or online at www.nypdcrimestoppers.com.
Posted by raymondaedel@gmail.com at 8:00 AM