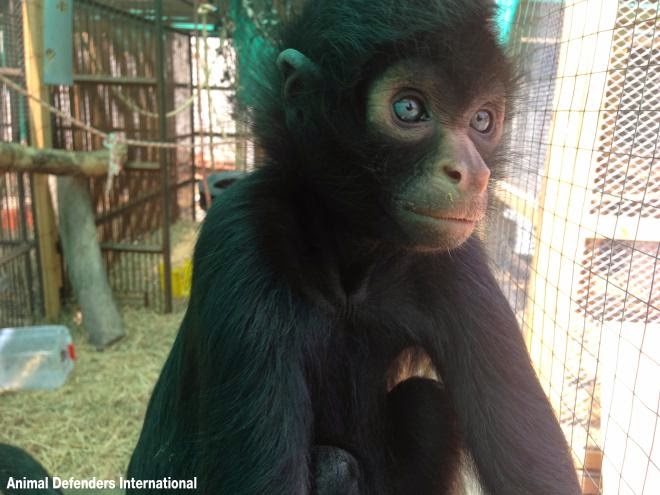 The tale of Pepe, spider monkey rescued from a circus in Cusco, by Los Angeles-based Animal Defenders International has gripped animal lovers around the world.

The intelligent, playful monkey had been kept alone and chained by the neck for eight years.

The circus had snapped off Pepe’s canine teeth so that he could not defend himself, and the world’s leading veterinary dentist had to be flown in to repair the damage.

Now, in the next chapter of his story so far, Pepe has finally been reunited with his own kind.
ADI has been assisting the Peruvian authorities to enforce their ban on the use of wild animals in circuses, as well as with the relocation of animals seized from the illegal pet trade – a mission called Operation Spirit of Freedom.

In January, the ADI rescue center outside Lima received Valerie, a young, illegally-trafficked spider monkey who was being used for entertainment in a restaurant.

For Valentine’s Day, ADI has footage of Pepe meeting Valerie for the first time, and their joy as they begin to play and chatter to each other: http://youtu.be/lwnlMPpGKmM